“Let your life lightly dance on the edges of time like dew on the tip of a leaf.” ~ Rabindranath Tagore

Rajib Mukherjee is a dreamer. He works as a solution architect in the IT world, drawing inspiration from the authenticity of the dream world. He lives in a small town in Georgia with his wife and two kids. He was born in Kolkata (Eastern India), grew up in Hyderabad (Southern India), and married a Manipuri girl (North-Eastern India). As a result, he speaks four different languages.

He had always been a dreamer. As a child, when he first learned to pinch himself in the dream to tell it apart from reality, the potential of lucid dreaming made him ecstatic. But, when the child awoke to find the joy was short-lived, he figured a way to relive them later – jotting down the impressions. The yearning for those magical moments in that child gave birth to his dream of becoming a writer someday.

He hopes to transform the world into that dream world beyond limitations and bondages through his words. It’s still a dream but a dream worth dreaming! 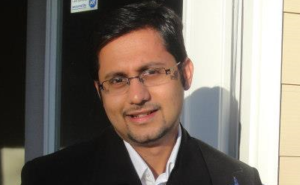