Fellow students always thought him timid. He would never mix with peers, play or wander around even for a casual chat. He would go to his class in the morning, remain seated in his seat all day, skip recess and walk straight back home at the end of the day. Other kids would pick on him but he never retaliated. Instead, he focused all his attention on learning Math and Science. He had an innate ability to relate Science with Philosophy. While he could see science even in the mundane of things, he had the capacity to view a science project from a philosophical angle. He repeatedly got roughed up by the envious kids but he hardly ever complained.

I was his only friend in the class of fifty. I distinctly remember the occasion when I was left totally baffled by the end of a science class. I asked him to explain the concept of vector and scalar in simpler terms. He said, “Our English teacher’s class is a scalar. She would take you go for a ride but you will find yourself in the same spot after couple hours. ‘Distance’ covered indeed, a directionless scalar and yet zero ‘Displacement,’ a well-directed vector. Unlike our math teacher who wouldn’t talk much but if you follow her, you would progress so much. Distance same as displacement, bang-on efficiency.”  That had landed him into some serious trouble with the English teacher who had sneaked up from behind us. On another occasion, when he was given a frog to dissect in a biology class, he released it right off the window. When the teacher called him out, he said, “A man with a soul doesn’t need to rip open another creature for self-enlightenment.” The biology teacher rewarded him by quadrupling his homework. And yet he managed to top.

No wonder, they envied him!

Months turned into years and years into decades but Partho’s attitude has hardly changed. He is still a topper in the subjects of his choice and even now he can’t get along with people. Partho Ghosh, now in his early thirties, appeared much older than his age. Ria, Partho’s wife, is my sister and is very affable in nature. She always got things done with her own brand of charm and grace. Her cleanliness and a wonderful knack for finding order in chaos were how, I believe, Partho managed to survive. He had been a gold medalist, top of his class with over one hundred inventions under his belt, ranging from small respirators to innovative metal detectors to hypnotic devices, but he never patented any of them. His inventions either ended up in his science closet or in a science museum, to which he often donated them, though he always preferred to remain anonymous.

Friends and family distanced themselves overtime and of course, they still envy him!

Though his quirky personality and lack of social graces might be a bummer in any other line of work, in the crime-solving world, he has no rival. When the brilliant detective sets out to solve a case with his cache of gadgets at his side, there’s no criminal in the world that can elude him. But this time, even Partho might not be enough. With a single, seemingly innocuous newspaper ad, a web of intrigue, murder, and international disaster is uncovered.

Can the unconventional skills of Partho help when a friend becomes an unwitting participant in a brutal murder? Find out in the riveting suspense thriller available now on Amazon here. 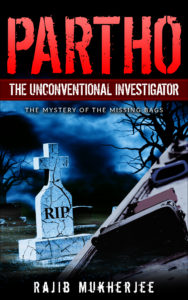